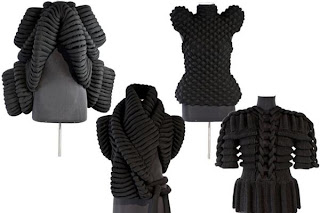 “Sandra Backlund arrived at our knitwear company with a big case full of marvellous samples and prototypes that really amazed us,” Michele Bocchese, sales and marketing manager at the Maglificio Miles recounts. “We have met a lot of famous and talented designers at Miles, but we had never seen anything like Sandra’s pieces. Even my mother Silvia, who’s been working in this field for forty years, found it difficult to understand how Sandra could create by hand those pieces.”

The collaboration between Swedish designer Sandra Backlund and the historical Italian knitwear company Maglificio Miles started after Andreina Longhi, one of the founding members and now chairwoman of the White Club, introduced them. The Maglificio Miles was established in 1962 by Silvia Stein Bocchese. In its early days Miles was just a small laboratory with three workers but it soon turned into a successful knitwear company. At the end of the 60s Miles started an important collaboration with Yves Saint Laurent when model Lison Bonfils introduced Silvia to the French designer. Since then the company extended its portfolio, collaborating with numerous fashion houses and designers, among them also Azzedine Alaïa, Sonia Rykiel, Giorgio Armani and, more recently, Lanvin and Marc Jacobs.
Posted by Chins Wonda-Land at 19:11