How Much Did Roland Mouret Help Victoria Beckham With Her Frock Line? 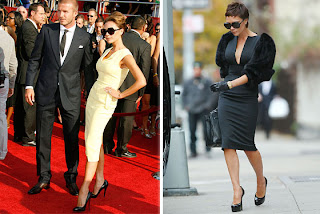 Victoria Beckham in Roland Mouret (left) and one of her own designs.
Photo: Getty Images, Splash

Designing clothes people want to spend thousands of dollars on is no easy feat for someone with no design background, like Victoria Beckham. After her denim line floundered, it's no wonder she wants to get things right with her new frock line, which ranges in price from roughly $1,000 to $3,000 and hit the Bergdorf Goodman sales floor here last week. Roland Mouret, a friend of Posh's, is reportedly helping her with the line. A source in Mouret's office tells the Daily Mail:

‘It’s been a bit of a joke as to how much Roland has been involved. The similarities between the dresses are undeniable.

‘The fact that Roland has been so hands-on has been kept a tightly guarded secret until now. We have all been convinced that Roland and Victoria must be in some kind of a business arrangement.’

A spokesperson for Beckham maintains that Mouret has no creative input on the line but confirmed to reporters that the designer set the Poshter up with his pattern cutter and fabric suppliers. "There is no secret Roland has helped Victoria set up various aspects of her atelier in London," the spokesperson adds. But Posh's designs are suspiciously similar to Mouret's. Like his, her dresses fall below the knee and include an inner corset and full-length zipper. Additionally, her dresses include "Dear Customer" tags that look almost exactly like the ones that come with Mouret's dresses. It's shaping up to be the dress scandal of the year! Because other celebrities, like Lauren Conrad, obviously design their own stuff.

Which bit of your dresses DID you design, Victoria? [Daily Mail]
Posted by Chins Wonda-Land at 17:03