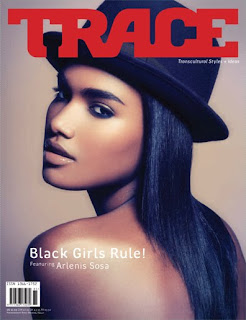 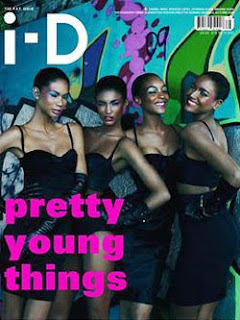 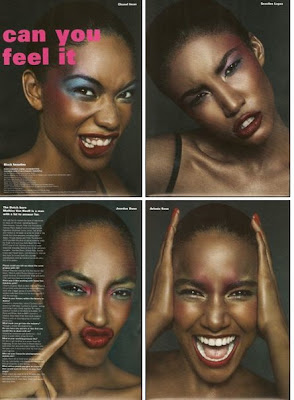 In April Chanel Iman tweeted about shooting a "MAJOR SURPRISE COVER" in London. Within a day Sessilee Lopez tweeted about "A MAJOR MOMENT IN FASHION," also shot in London. As the tweets suggested, they were together, shooting the cover of September's i-D alongside Arlenis Sosa and Jourdan Dunn, lensed by Emma Summerton. Fashionologie notes that i-D is "the first (and so far only) major fashion magazine to go with women of color for their September issue this season." Hopefully Jourdan and Arlenis won't let their Twitter feeds lie fallow the next time major shoots like this happen. We also have the Trace mag featuring black model Arlenis Sosa, things are about to change around here, designers step your game up use every type of model that will make the clothes on the runway look amazing other women around the world to exist you know. Make sure you all go out and buy a copy and support it, even if you have to order online, lets make history again like we did with the all black Vogue make it the highest and fasting selling magazine in HISTORY!!!
Posted by Chins Wonda-Land at 18:03

Ahhhhh Such a breathe of fresh air, it's about time isn't it!!!

WOW all of them look amazing it's good to be black, I love being a SISTER we are so fly!

I love this its amazing to see women of colour on high fashion magazines, and not your stereo typical cover shoots for just urban Mags. Love it hope to see many more high Fashion with Black models

about time good to see this happening!!